Earth Day: Would you buy a $60 energy-efficient light bulb? 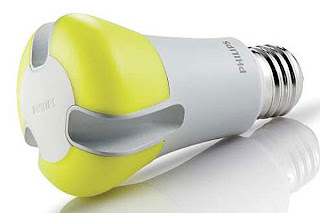 Earth Day 2012 arrives with sticker shock: Brace yourself for the $60 light bulb.

Light bulb manufacturer Philips is flipping the switch Sunday on its new super-duper energy-efficient LED light bulb; that's when the bulb will go on sale at various outlets. The full retail price is $60, but consumers will be able to find online deals, rebates and subsidies that will cut the price by $10 or more, according to the Associated Press.
Proponents of the new light bulb, which can reportedly last up to 10 years or more, say it will ultimately save consumers money because they won’t have to replace nearly as many light bulbs over time.
Philips says the bulb will also save plenty of energy: It consumes less than 10 watts to produce light that is the equivalent of a 60-watt incandescent bulb, saving 83% of energy in the process. The company says that if every household in the U.S. used the new bulbs instead of regular 60-watt bulbs, the nation could avoid 20 million metric tons of carbon emissions.
"That’s enough electricity to power the lights of nearly 18 million U.S. households, or nearly triple the annual electricity consumption of the city of Washington D.C.," a company fact sheet says.
That might make the price tag a little easier to swallow.Still, the light bulb is not for every budget. Time.com points out that the average U.S. home uses 45 light bulbs, so replacing all of them would run $2,250. To quote Time.com: "Yikes."The light bulb's release is the result of "the L Prize," a $10-million contract awarded by Congress in 2007 to the manufacturer who could find a way to replace the regular ol' light bulb, which is an energy suck. Philips won the contest by a landslide. (The AP notes that Philips "was the only entrant.")The unveiling of the new LED bulb is just one of many events marking Earth Day this weekend.Beach and park clean-ups are slated from coast to coast, and there's no shortage of rallies and festivals celebrating Mother Earth. One of the biggest events will be Sunday's rally from noon to 7 p.m. on the National Mall in Washington, D.C., with entertainment by Cheap Trick, and an address by the Rev. Jesse Jackson, among others.The first Earth Day was reportedly held in 1970 in San Francisco. Since then, it has turned into a world-wide celebration. The official website says that more than 1 billion people now participate in Earth Day activities each April 22, "making it the largest civic observance in the world."