The difference between CFL and LED bulbs illuminated. 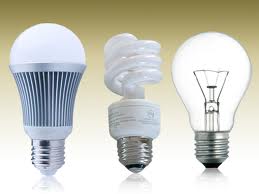 News Channel 5 viewer Debi Charnisky wanted to know the difference between LED and CFL bulbs, so News Channel 5's Heidi Glaus set out to illuminate the differences in this week's Hey Heidi! segment.
No doubt, light bulbs aren't what they used to be, for years our biggest dilemma was about watts, but that was before LED and CFL bulbs hit the market.
So to help shine a little light on the subject, we turned to Jeff Berg at Ameren.
"So LEDs have that longer life, they also perform better in very cold temperatures and they're instant on. An energy star rated CFL can take up to one minute to come up to full brightness," Berg explains.
They should last longer than what you're used to.
"So with the CFLs you're going to get up to a 10 year life. LEDs will be much longer, 20 to 25 years," Berg goes on to say.
Both are more energy efficient, but at this point, you have a few more options with CFLs, you know, the squiggly ones.
"So you can get anything in the CFLs like a little candelabra, flood lights, spotlights, these regular lights. You're not going to see quite the variety in the LEDs yet," Berg adds.
When it comes to switching out an old CFL or LED, both should be recycled.
"Ameren Missouri does provide over 100 free recycling locations throughout our service territory so if people go to www.actonenergy.com and click on locator tool and that will show them where they can find a close recycling location," Berg explains.
"The LEDs are considered electronic waste so you recycle that the same way you would recycle a computer or a DVD player," he goes on to say.
That's because there's actually a computer chip inside LED bulbs. Of course, both of these bulbs are more expensive than those old incandescent bulbs, so here's one more bright idea from Jeff.
"If you're going to be replacing your old bulbs with the new efficient bulbs, the best way to do that is to start with the areas that use the most light. So, I would start with your reading lamp or your kitchen lights and work back from there," Berg suggests.
Eventually we will all have to make the switch, because one day incandescent bulbs will go dim.