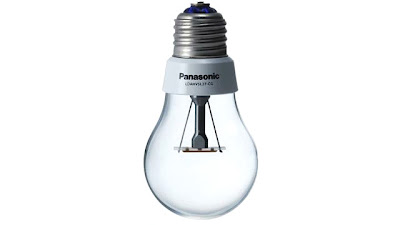 Like an obnoxious great uncle who's overstayed his welcome, horribly inefficient incandescent bulbs are still lingering around because we're just used to them. So Panasonic has designed a new LED Alternative with a visible filament and clear glass that looks like the classic Edison Bulb, while still being remarkably more energy efficient.

There's no word on when you can get your hands on one, or how insanely expensive they'll initially be, but Panasonic's new LED bulb goes a long way to bridging the psychological gap that keeps people buying inefficient incandescents because they prefer the way they look. Using just 4.4 watts of power, the LED filament in this bulb is rated for up to 40,000 hours of use. So if you were to install one just after you were born, you wouldn't have to change it until your 40th birthday, with just a few hours of use every day.

Besides the energy saving benefits, LEDs aren't as harmful to the environment as CFLs, which contain mercury and need to be disposed of properly. And they reach full intensity as soon as they're turned on, making them better suited in places like bathrooms where you don't necessarily want to have to wait for the lights to warm up. The development won Panasonic a 2011 Good Design Award, and hopefully convinced the powers that be that these are certainly worth putting into production. Even if only those of us on the bleeding edge are willing to spring for them.

Source for this Article: Gizmodo