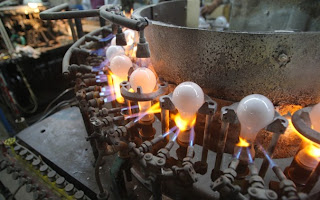 OMERSET, N.J. — Ed Crawford wants to unscrew 130 years’ worth of the light bulb’s history. But how many MBAs, engineers and lobbyists will it take to help him do that?

As retailers and governments begin phasing out incandescent light bulbs, lighting companies are scrambling to introduce products and change public mind-sets about how much a light bulb should cost. Crawford has a big challenge ahead of him: He’s chief executive of the North American lighting division of the world’s largest lighting company, Philips Electronics.

(Wendy Galietta) - Lighting companies are creating more expensive bulbs, such as this halogen bulb, for retailers to offer instead of the incandescent ones.

“Our marketing mix has to become more creative,” Crawford says while walking the halls of the Philips offices, past rooms where high-tech displays show how lighting affects moods in kitchens and living areas.

Philips has been hiring marketers and engineers from consumer products companies to prepare for the change. Its North American headquarters in suburban New Jersey is a short drive from the red-brick labs where Thomas Edison developed and improved early light bulb technology.

Scientists at the world’s major lighting companies — General Electric, Philips and Siemens AG subsidiary Osram-Sylvania — are creating more expensive compact fluorescent bulbs, halogen bulbs and light emitting diode (LED) bulbs for retailers to offer instead of the incandescent bulbs they have sold for more than a century.

Starting next year, the Energy Independence Act of 2007 will require 30 percent more energy efficiency in bulbs. The legislation phases out 100-watt incandescent bulbs from sale starting in January and ends with 40-watt bulbs phased out by January 2014. Similar legislation is in place in parts of Europe.

Philips lobbied for the change in recent years. Other companies — accustomed to continual profits from selling 50-cent disposable incandescent bulbs year after year — were forced to get onboard with it. Some Republicans, including presidential candidate Rep. Michele Bachmann (Minn.), have tried recently to overturn the legislation, but without success.

The Natural Resources Defense Council said that by 2020, the new law will reduce energy costs by $100 to $200 per household each year. That could eliminate about 30 large power plants, according to the NRDC. The U.S. Department of Energy predicts that the new law could save households in the United States nearly $6 billion in energy costs by 2015.

Light bulbs have been a major product for GE since Edison invented the incandescent bulb in 1879. At one point in 2008, the company tried to get rid of its lighting division. But it now sees the business as an area of growth in a $65 billion global lighting industry.

The Freedonia Group in Cleveland expects U.S. demand for advanced lighting products — LEDs, compact fluorescents, halogen lights and other products that will replace incandescent bulbs — to grow nearly 11 percent per year to $6.8 billion in 2013.