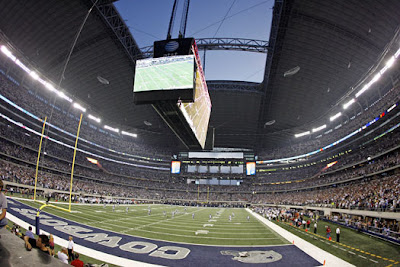 The new Dallas Cowboys stadium, which opened last year in 2009, is the largest domed stadium in the world, features the world’s largest high definition video screen, and is the largest of any of the NFL stadiums. Stadiums as massive as the Cowboys’ pose many problems when it comes to lighting, namely how to efficiently and evenly light such an enormous space while providing light quality sufficient for HDTV live video broadcasting and audience comfort. Cowboys Stadium designers sought out GE’s expertise in large scale architectural LED lighting to plan and implement a lighting solution for the mighty Texas football stadium. GE provided more than 750 1,5000w LED luminaires and an extra 60 of the same 1,500w LED luminaires for security lighting at the stadium. GE and the stadium lighting designers chose LEDs over high performing metal halides because they would last multiple years rather than months, and would not require time to reach full luminosity following a blackout, a situation which can potentially present safety hazards. Furthermore, GE’s LED luminaires proved more than adequate for creating an even blanket of light to provide excellent visibility in the stadium and optimal light conditions for the extremely sensitive HDTV video cameras used for broadcasting.
Though BulbAmerica may not have what you need for lighting Cowboys Stadium or a venue its size, we have a wide selection of outdoor LED products and GE lighting products that will provide you with the light you need. Do not hesitate to leave a comment or question on our blog or Facebook, or give us a call at 1-877-622-0897. Check us out today, and go for the endzone with BulbAmerica!
By Anonymous | 15 December, 2010 | 0 comments
next post → ← previous post