Osram's LEDs Light the Way for the Asian Games 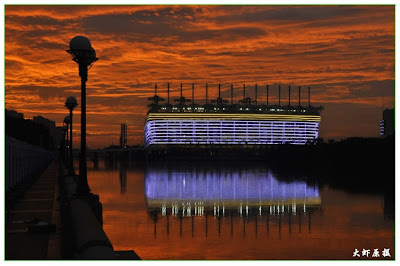 The Asian Games is a multi-sport event in which all of the Asian nations congregate and compete against one another in tennis, wrestling, hockey and many other events. This year’s Asian Games are to be hosted in China’s third largest city, Guangzhou. Among Guanzhou’s numerous architectural highlights is the new half-stadium, built for the Asian games, in Haixinsha Square. According to LEDs Magazine, the new stadium features an amazing array of 3,200 LED flood fixtures, comprised of 200,000 of Osram’s powerful LEDs. The LED system's light highlights the stadium’s cutting-edge terraced exterior and spills across the river beautifully behind it. The stadium and its alluring lighting will makes its debut on November 12th to usher in the beginning of the games before a crowd of thousands and a television audience of millions.
BulbAmerica stocks a wide range of Osram’s high quality and high performing LED and non-LED lighting products. Also be sure to check out all of our outdoor LED lighting products, so you can make the exterior of any structure or space shine with brilliant light and color. Don’t hesitate to leave us a comment or question on our blog or Facebook, or give us a call at 1-877-622-0897.
By Anonymous | 12 November, 2010 | 0 comments
next post → ← previous post