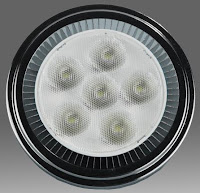 It is widely known in the lighting world that the LED revolution is taking place and incandescent bulbs in the home, office, and theatre are quickly falling by the wayside. LEDs are also beginning to emerge as potential replacements for high intensity discharge lamps (HID) as well in industrial, commercial, and outdoor applications. According to Newstreelights.com, the city of Naperville, IL, a western suburb of Chicago, has initiated a pilot LED streetlight program. The Naperville program has replaced one of the town’s blocks with LED street lights that feature a 50,000hr life hour rating compared to the 20,000hr life hour rating of traditional high pressure sodium streetlights. The project’s leaders believe LEDs to be ideal for streetlights because they offer a bright and sharp white light that will give drivers and pedestrians alike good visibility. The street lights are 120w and they replaced 310w HPS streetlights. After initial tests, it was shown that the LED street lights used only 57.6% of the energy the HPS streetlights did. Naperville has almost 11,000 streetlights, if this pilot program proves successful; All of the streetlights may be eventually replaced, thus providing the city with potentially huge energy savings.

This is the second article I have written on LEDs replacing HIDs and other light sources in outdoor and commercial applications. There is a fair amount of nay saying and skepticism, albeit much of it healthy skepticism, surround LEDs. Hopefully the pushes for large scale LED retrofits will encourage individual and homeowners as well to invest in LED bulbs and display products. BulbAmerica offers numerous LED retrofits from LED A-shape bulbs, to PAR38s, and many others. Admittedly the price point of many LED retrofit bulbs are high, but one should factor in the long term energy savings that come with LED lighting’s efficient performance. Furthermore, LED technology remains still in its infancy, so expect to prices to come further and further down in the future.

BulbAmerica has an amazing range of LED products to choose from at the best prices around. If you have any questions do not hesitate to leave a it or a comment on our blog or Facebook. Also, don’t be afraid to call 1-877-622-0897.
By The Lighting Specialist | 01 September, 2010 | 0 comments
next post → ← previous post