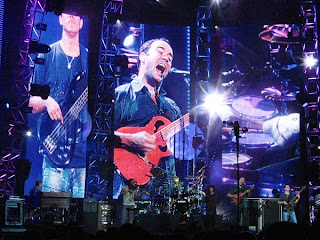 “Don’t Drink the Water”? please, Dave Matthews Band’s Summer Tour’s lighting was good to the very last drop. Lighting and Sound America did a great article on DMB’s summer tour and now I have so much to say about it, all good things of course. I have so much to say about it because I was there earlier this summer (and unfortunately did not bring a camera!) to enjoy the music and the lighting action. DMB’s concert was an amazing display of LED video and moving head technologies. The video walls worked well at the DMB show, as it does at most arena and stadium venues, because they do away with the space between the stage and some of the satellite seating areas. According to LSA, DMB’s set up featured 30 LED video walls at the front of the stage which projected all of the guitar, violin, and drum action. Although the video walls dominated the front of the stage, it was by no means too much. The walls were balanced by an impressive array of moving head spot and wash units that filled the stage with impressive saturated colors while animating the music with dancing beams.

The DMB Summer Tour featured other lighting effects, including strobes, which added to the ambiance, the dancing, and the crush of fans singing along in the audience. The entire concert, as all concerts are today, controlled perfectly using a series of controllers and back up controllers in case one was to fail. According to LSA, the concert’s designers heavily utilized cues and scenes to keep the show feeling tight, as well as allowing the band’s performance and the lighting to remain synced up night after night. The effect of the synced up lighting and performance resulted in me, and the rest of the audience included, I’m sure, wanting to stay for a while, a long while more. Well, I guess that does it for this article. And will I tell you what song Dave closed with? What would you say? No way, you’ll have to see Dave and the band for yourself.

Make BulbAmerica you number stop for concert lighting. Leave me a comment or question or call our experts at 1-877-622-0897 if have any other questions.
By The Lighting Specialist | 31 August, 2010 | 0 comments
next post → ← previous post