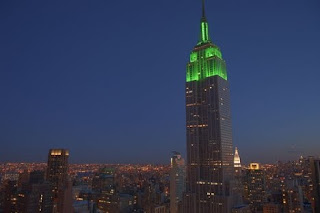 The Empire State Building at night is the crown jewel of the New York City skyline, and is perhaps the most famous city skyline in the world. The Empire State Building’s illuminated top is iconic, it’s image among the most well known images of any building at night. The Empire State Building, which was completed in 1931, had its first light, a searchlight, placed on top of it in November of 1932 to celebrate the presidential victory of Franklin Roosevelt. It became a nighttime beacon in 1964, with the installation of floodlights on the top 30 floors of the building. Color lights were first installed in 1976 for the United States’ bicentennial, illuminating the building’s tower with red, white, and blue. In 1977, additions to the Empire State Building’s exterior lighting were made, creating the iconic image which we are familiar with today. The installation included 207 metal halide high intensity discharge (HID) lamps and 304 fluorescent lamps illuminating the building from the 72nd floor to the base of the TV tower. The last addition to the building’s lighting took place in 1984. An automated lighting system, which included 880 vertical 75 watt fluorescent tubes and 220 horizontal fluorescent tubes were installed on the upper portion of the TV tower mast. The horizontal bulbs are organized into different panels and produce green, blue, yellow, and white lights, thus creating the lighting displays you see today.

Though the Empire State Building’s exterior lighting has not been changed since the 1980s, the interior lighting underwent substantial greening in the spring of 2009. The Empire State Building contains 3,194,547 light bulbs, so developing an environmentally friendly lighting solution for the building’s vast light system was a challenge. The $100 million dollar greening project included the replacement of old incandescent light bulbs with more energy efficient ones as well as the installation of motion detector systems to only light rooms when they are occupied. These energy efficient renovations, including lighting renovations, are projected to cut the building’s energy consumption by 38% and save it $4.4 million dollars annually.