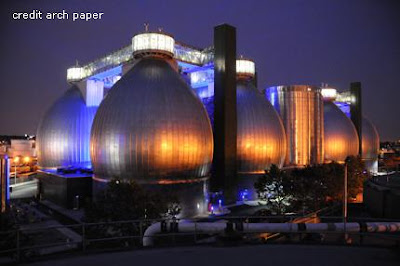 Separating Brooklyn and Queens, New York, and virtually in our backyard here at BulbAmerica, is Newtown Creek, one of the most polluted bodies of water in the United States. This waterway has been used for decades for industrial purposes and as a result is full of toxins as well as sewage runoff and overflow from Manhattan sewers. In 1967, the New York of Department of Environmental Protection (NYDEP) built the Newtown Creek Water Treatment Plant, a collection of eight 145 feet high and 80 feet in diameter stainless steel digesters that break down the creek’s muck and pollutants and purify the water. Situated on a highly visible tract of land between New York’s two largest boroughs, as well as near a major highway, it became important to the city that the Newtown Creek treatment plant not merely purify, but also glow in order to accentuate the digesters’ radical design and also highlight the mission to purify New York’s waters. The city commissioned New York lighting design firm, L'Observatoire International to give the digesters lighting that would set them off against New York’s skyline. The lighting of the Newtown Creek plant was not a separate renovation, but the continuation of a campaign to make the plant appear more aesthetically appealing that began in 1998.
The lighting scheme for the plant is fairly simple. L'Observatoire International decided to mount five 5,000w metal halide lamps on each of the digesters to give them an otherworldly blue glow. The blue glow is also intended to convey the city’s campaign to purify the creek’s waters and improve New York for all. On the back side of the digesters are white metal halide lamps that produce a whitish-amber light that suggests purity and cleanliness. An addition challenege to the design team was that the treatment plan is function nearly 24 hours a day, so the light had to be functional and provide visibility adequate for plant workers at night.
The Newtown Creek shows the ability of architectural lighting to transform any structure, no matter how mundane, into an attractive element of the landscape. BulbAmerica has bulbs, washes units, and outdoor PARs perfect for outdoor lighting so you too can make whatever is ordinary at your home or business glow. As usual give us a ring at 1-877-622-0897, leave a comment on our blog, or post on our Facebook with any questions you have.
By Ganesh Madras | 14 January, 2014 | 0 comments
next post → ← previous post