The Math Changes on Bulbs

Modern LEDs, While Expensive, Save Companies on Labor

How many workers does it take to change a light bulb? Not as many as it used to. 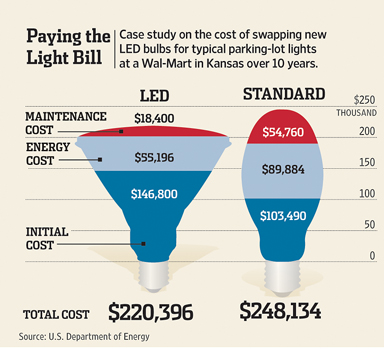 And that is what's making the difference in getting companies like Wal-mart store Inc., GNC Corp. and Caesars Entertainment Corp. to shell out for advanced new lights.

Bulbs built around light-emitting diodes—semiconductors that produce bright light when zapped with electricity—last 10 times longer than conventional bulbs, meaning fewer ladders blocking frozen-food aisles or unsightly scaffolds towering in hotel lobbies as workers change blown-out bulbs. With energy savings not yet enough in some cases to cover the higher cost of the new bulbs, it's lower maintenance costs that are getting sales across the finish line.

"If you think about a 20- to 40-foot tall parking lot light pole, you need a bucket truck and electrician to replace those lamps every two years. Now these will last us 10 to 12 years," said Charles Zimmerman, Wal-Mart's vice president for international design and construction. "The big payback number is on the maintenance."

Consumers can get by using compact fluorescent bulbs in their lamps. But for specialized commercial applications like refrigeration, parking lots and lobby lighting, the answer is LED, some businesses say. 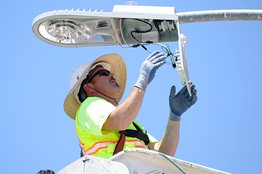 A TransCore worker removes a street light to replace it with a new LED light fixture in August in Las Vegas.

LED bulbs cost as much as 20 times more than their conventional counterparts. Energy savings are an important part of the economics. Lighting can account for a third of a big store's energy costs, and LED bulbs can cut lighting bills by three-quarters.

A 2009 case study by the U.S. Department of Energy on a Wal-Mart parking lot in Leavenworth, Kan., however, shows energy savings alone may not justify the cost.

The DOE compared LED lamps to a typical parking-lot lights and found the cost of the LED lamps plus energy bills over 10 years were higher than for the older bulbs.

That balance will change as the cost of LED bulbs comes down—they've already fallen 30% since 2009—but for now it's lower maintenance expenses that are allowing companies to recoup the upfront costs in less than three years, a key threshold for bean counters.

"Instead of replacing a bulb seven times a year, now you're talking about not touching a bulb for four or five years," said Eric Dominguez, Caesars Entertainment's director of energy services. Workers then can be shifted onto other tasks, Mr. Dominguez says.

Changing light bulbs has become more complicated than the "How many..." jokes imply, store owners say, particularly inside freezers and signs, which can require technicians. At the 33-story Intercontinental Hotel in San Francisco, changing a light bulb can cost about $50. Factoring in the long life of the bulbs, the hotel made the upfront costs of switching to LEDs work, said Harry Hobbs, the hotel's director of engineering.

"It allows me to be more efficient with the use of that labor," Mr. Hobbs said.

LEDs have evolved from their start as the tiny indicator lights on devices like coffeemakers to illuminating cellphone screens and billboards in Times Square. Wider use in general lighting for homes and businesses has been held back by high prices, poor light quality and bad colors.

That's starting to change. LED prices are falling at a time when businesses and municipalities are in the market for cost-cutting technology amid tight budgets and rising outlays on energy. The DOE predicts LED bulb prices will drop by around 30% a year until 2015, meaning by the end of the decade such bulbs will cost a tenth of what they did last year.

A year ago, Home Depot introduced a LED bulb that gives off as much light as a 40 watt incandescent bulb—but it cost an eye-popping $21. Today, that bulb sells for $9.97. 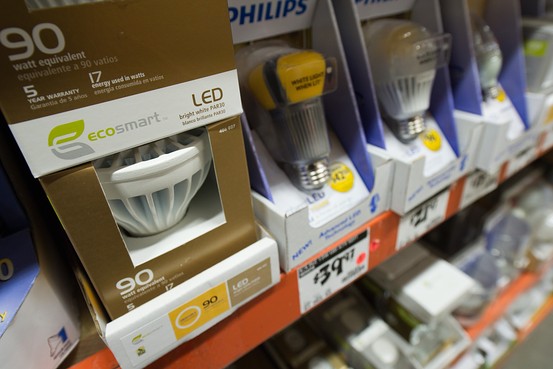 Light-emitting diode light bulbs are displayed for sale at a Home Depot store in Emeryville, Calif., in June.

As a result of legislation passed in 2007, general-purpose bulbs will have to be at least 25% more efficient beginning next year than those using the standard incandescent technology invented by Thomas Edison in 1879. Most of today's incandescent bulbs will be phased out by 2014 and replaced by more efficient alternatives.

Last month, Wal-Mart opened its first U.S. store lit entirely with LEDs, a 40,000 square foot store in Wichita, Kan. The world's largest retailer will use only LED lights in the parking lots of new stores around the world. GNC Holdings Inc. and Starbucks Corp. have converted all of the lighting in their outlets to LEDs.

USM Services, a unit of Emcor Group Inc. that provides facilities maintenance around the country from removing snow to changing light bulbs, has seen a drop in maintenance needs of customers that have adopted LEDs.

"If the bulbs last longer," said Ivan Dubois, chief operating officer of USM Services, "you're going to have less maintenance to do."

Source for this article: The Wall Street Journal