Lighting the way to efficiency

The days of inefficient light bulbs are slowly coming to an end. Recent tests from Consumer Reports showcased more than 30 different compact fluorescents and light-emitting diodes that can brighten indoor and outdoor spaces.

Consumer Reports’ comprehensive report on CFL and LED bulbs revealed that many problems of the earlier versions have been overcome and these new efficient bulbs last longer and use far less electricity than incandescent bulbs. Shoppers now have a variety of different bulbs to match their needs. 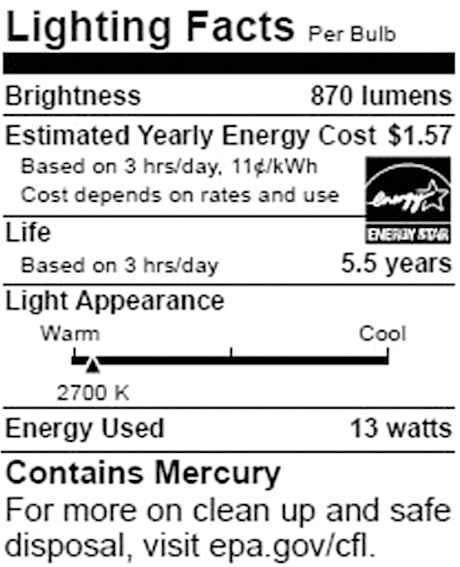 The label , patterned on food nutrition labels, lists the bulb’s lumens, or brightness; its estimated yearly energy cost; how long the bulb is expected to last; its appearance, from warm to cool; how much energy it uses; and whether the bulb contains mercury.

Consumer Reports put a spotlight on 60-watt equivalent CFLs and LEDs, as those are the most popular.

It usually takes less than a year to recoup the cost of most CFLs because of the bulbs’ lower prices. LEDs can take four to 10 years to pay for themselves because they are expensive.

The best LEDs were as bright as the incandescents they replaced, yet only half were as bright as promised. Consumer Reports found that all LEDs reached full brightness instantly, even at frigid temperatures, providing warm white light. Energy use matched or exceeded claims.

Don’t confuse brightness with color. The whiteness, yellowness, or blueness of light is measured by its temperature in kelvins. Incandescents produce a warm yellowish light with a color temperature of about 2,700K. At 3,000K to 4,100K range, they give off a cool, bright white light that’s similar to a halogen bulb, and at 5,000K to 6,500K, the bulbs mimic natural or daylight.

Note CRI. In addition to temperature, the Color Rendering Index indicates how accurately colors appear under the light and ranges from 0 to 100, with daytime sunlight at 100. A CRI of at least 80 is recommended for interior lights.

Read the package. As of Jan. 1, 2012, a Lighting Facts label must appear on the packages of most bulbs to show brightness, energy use, estimated energy costs, expected life, light color in kelvins, and, for CFLs, mercury content.

Source for this article: Boston Globe