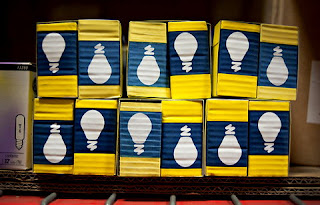 The first step in getting people to change the way they consume energy is making them aware that change is afoot. When it comes to lighting technologies, in particular, it seems that consumer awareness is growing.

For the first time, a majority of Americans now know that federal legislation will eliminate “most traditional incandescent lighting by 2014,” according to a new survey conducted by the lighting manufacturer Osram Sylvania.

“Americans are increasingly prepared for this lighting transition,” said Stephanie Anderson, a spokeswoman for Osram Sylvania. She said the survey also showed that 62 percent of those polled had swapped out a light bulb over the last year to increase energy efficiency.

Still, when it comes down to details, people are less clear about what is going to happen beginning in January.

Only 29 percent understood that it is the 100-watt incandescent lamp that will no longer be manufactured starting in 2012. (While its manufacture will be forbidden, the sale of existing stock will be allowed.)

Under the new legislation, lamps that produce the approximate brightness of a 100-watt bulb can only use 72 watts to do so. In 2013, when traditional 75-watt lamps can no longer be manufactured, their substitutes can only use 53 watts of energy to produce the same amount of light.

In California, the same rules are being put into effect a year earlier.

While only 13 percent of respondents said they were using LED light sources as replacements for regular bulbs, 80 percent of those surveyed said they had heard of them. Only 68 percent were aware that the compact fluorescent lamp, or C.F.L., exists.

For those who want to replace 100-watt standard lamps with energy-saving varieties, consumers can now choose between C.F.L.’s and halogen lamps. While C.F.L.’s use less energy and last longer, halogen lamps will create light that is closer to that from incandescent bulbs.

LED lamps that produce as much light as a 100-watt bulb are not yet available; many companies plan to sell them next year. LEDs that create the equivalent of a 40-, 60- or 75-watt standard bulb are readily available today, although they can cost as much as $40.

Even with the new rules, it is likely that incandescent bulbs will be found in homes years from now. As in years past, the Osram Sylvania survey found that around 13 percent of those surveyed said they planned to hoard standard light bulbs.

Source for this Article: The New York Times