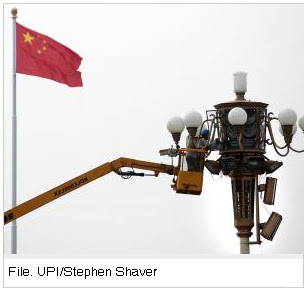 Beijing plans to evaluate the program for one year beginning September 2015 and may adjust the last phase depending on the results.

Lighting accounts for 12 percent of China's total electricity use.

In its latest five-year plan, which concludes in 2015, China said it would reduce energy consumption per unit of gross domestic product by 16 percent and cut carbon emissions 17 percent.

The plan to phase out incandescent light bulbs, NDRC estimates, will save China 48 billion kilowatt hours of power annually.

China is the world's largest producer of both energy-saving and incandescent light bulbs, NDRC says. In 2010, production of standard bulbs totaled 3.85 billion units, with domestic sales accounting for 1.07 billion units.

"I think what's important … is that China is joining an international trend," Christophe Bahuet, deputy country director of the U.N. Development Program was quoted as saying by The Guardian newspaper reports. "It also sends a signal that will inspire others."

However, Bahuet said, the initiative will require a lot of effort at the provincial and local levels to convince the Chinese people to switch to the energy-saving bulbs.

Statistics from China's State Administration for Industry and Commerce indicate that currently 40 percent of the country's energy-saving lights meet the required quality standard, with the percentage as low as 20 percent in some areas.

An editorial in Monday's China Daily newspaper warns that Beijing's new plan fails to address environmental problems associated with disposal of energy-saving bulbs, noting that if the mercury from one such bulb leaks and seeps into the ground it could pollute about 1,800 tons of underground water.

Source for this article: UPI