The World's Largest LED Screen is on Display in Shanghai 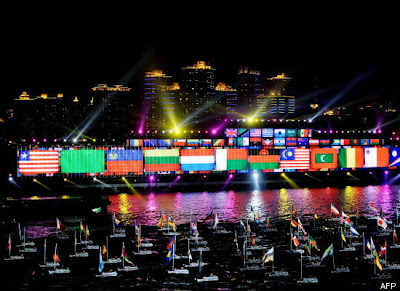 The 2010 World Expo in Shanghai, which began in May, is a multi-month event for the nations of the world to congregate and share with each other their cultures, peoples, and spirit. The architectural and artistic contributions of the nations present were not the only thing on display. Beginning this year’s world Expo featured a display of the wonders of LED technology with a light and fireworks show with the largest LED screen ever created at its center. The Shanghai LED screen was 9,500m, which is equivalent to nearly 105 football fields. The screen demonstrated many of the unique merits of working with LEDs. For one, because LEDs emit light from tiny bulbs and are clustered together, they can be formed into virtually any shape. This is especially useful for LED panels where they may need to be mounted in oddly shaped ceiling or wall spaces. The screen was also amazingly colorful, highlighting LEDs’ ability to rapidly change color and create bright, well rendered color. The durability of LEDs made them an obvious choice for the World Expo. The screen was situated on the banks of the Huangpu River in the center of Shanghai, so the weather and environment were unpredictable.

I probably sing the praises of LEDs too often on this blog but applications like the screen in Shangai beautifully display the technology’s versatility. From high resolution and low resolution panel displays to LED bulbs, consumer products, LED PAR cans, and DJ effects, LEDs are changing the lighting game. Though we can’t offer you a 105 football field long LED screen, we can offer nearly all other LED products and at great prices too, so check out what we have to offer! Don’t forget if you have a question or comment you can leave it on my blog or call toll free 1-877-622-0897.
By The Lighting Specialist | 27 August, 2010 | 0 comments
next post → ← previous post